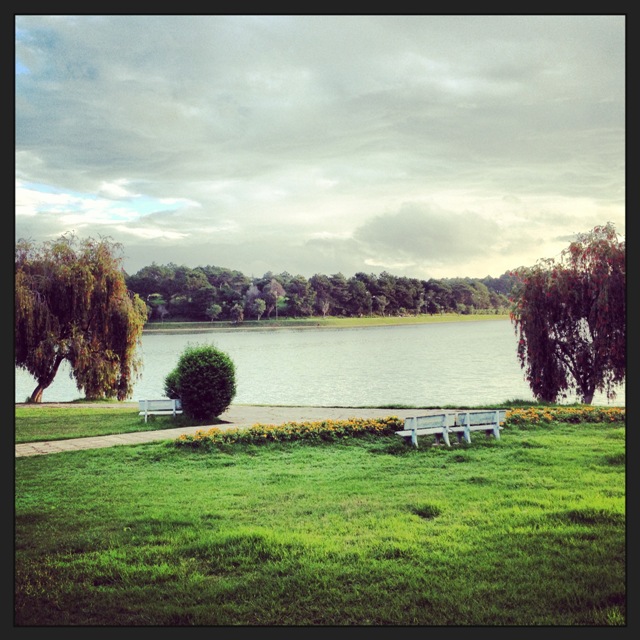 A walk around French-built Dalat reveals a mountain town that is still one of the most romantic destinations in Asia.
I took a long walk a few weeks ago. I started at Du Parc Hotel, ventured across the street and through the legendary Dalat Palace, then circled all the way around majestic Xuan Huong Lake.

At one stage, the old golf course — its lush fairways slightly obscured by a fence line draped in vibrant bougainvillea — was directly to my right.

At another point, I passed through the shadow of the post office’s Eiffel Tower-style transmitter and looked across the boulevard at another grand landmark — the towering Cathedral.

The stroll probably took a couple of hours. But I was in no hurry. The sun was out, the sky was blue, the air was crisp and clean, and the staff at Cafe de la Poste was still setting up for breakfast by the time I finished.

I've probably walked that particular route a dozen times. I never tire of it. Each time, I'm struck by the architecture. The ample sidewalk space. The hilly and romantic nature of the town and its surroundings. And I’m reminded of why the French were drawn to this piece of Vietnam real estate as well.

The funny thing is it took them some time to figure that out. At least according to Barbara Crossette, whose research on the origins of Dalat is documented in her book, The Great Hill Stations of Asia.

Once the French consolidated their hold on Indochina in 1862, the colons waited 15 years before sending expeditions into Vietnam's highlands. But once they did, the benefits of stations d'altitude became clear. At such elevation, the incidence of tropical disease was much lower. The mountains were good for your health.

That's what Alexandre Yersin would tell the French Governor-General, Paul Doumer, after exploring the area. The Swiss-born physician, who sailed with the French to Indochina and became the colony's leading authority on tropical diseases and their cures, even convinced Doumer to check out the Lang Bian Plateau himself.

Doumer did, but before long he was back in France. Development of Dalat would stall, until about 1915, when Maurice Long became the governor-general and Ernest Hebrard was commissioned to draft a plan for Dalat.

Soon, a prototypical hill station would emerge, complete with a health complex, playing fields, parks, schools, a hunting lodge (now the Dalat Palace), the aforementioned golf course and some of the more grand houses in Vietnam.

In the early 1940s, Dalat was booming, as an education center, as a hub of transportation and communications, and as a market town, “where forest products, handicrafts, and exotic mid-latitudinal fruits and vegetables … were assembled for shipment to Saigon and other lowland cities,” wrote geographer Robert R. Reed.

It was a heavenly slice of Europe in the heart of Vietnam.

Times haven’t changed much. Dalat is still a vital cog in Vietnam’s agricultural machine. (It’s often called the ‘City of Flowers.’) It’s still a place that attracts people looking to escape the swelter of Saigon and other hot-and-humid destinations in Southeast Asia. And it’s still good for your health.